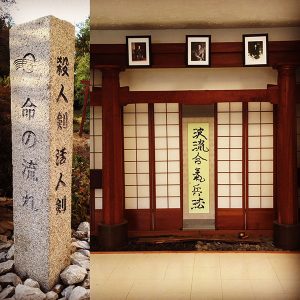 On many occasions I have seen two practitioners set up for a kata, or drill, one is Uke (uke dashi) one is Tori ( shi achi.) Uke begins his attack and tori defends, or launches his counter-attack and it turns out that uke was not close enough and the kata “falls short.” The look on tori’s face is usually one of annoyance at uke’s failure to ‘”get close enough.” I’ve even seen situations where tori will have uke go all the way through with his attack to make sure his distance is “correct.”

Funny thing, though…It is more often than not Tori’s fault. What happens is this, uke begins his attack and tori launches the counter way too soon. The result is, uke does not close in enough because there is a fist or a foot coming at him and he instinctively stops his forward motion, somewhat. In swordsmanship this becomes very evident. If I am shi dachi and uke dashi starts his attack and I immediately start my counter attack, uki dashi sees my bokken heading for his head. If you have ever worked with bokken, you know that a bokken coming at you fast will give you pause, causing the attack to fall short.

I find that if I allow the attacker to get far enough along in his attack that the eyes give that ‘Oh no, I’m going to hit!!!” look, the attacker will be near enough. A good way to practice that without having to see the eyes is to watch the position of the attacker and not start the counter-attack until the attacker is close enough for you to hit. If you both work slow and build up the speed only when both are able to deal with it, and that can take time, you will find that this works well for your training.

When you are boxing, kick boxing or grappling doing sparring or randori the distance will not be a problem, but learning the cooperative kata it is vital.

If you would like to work out with this, come on out to River of Life, we’d love to train with you!